Next to food, I love talking about money.

And even though I was terrible at math in school, I’m pretty good at crunching money numbers (with the help of Mint, my favorite money managing app).

Learning about personal finance and adjusting my lifestyle accordingly is why looking at my credit card balance doesn’t scare the crap out of me anymore.

Money is scary to wrap your head around when you don’t know where it’s all going. I’ve been there.

But once I took a deep look into my spending, I saw that eating at restaurants, ordering food and getting takeout all the time was an area I could work on.

And unless you’re foraging and hunting for your daily nourishment, food is something you have to buy every week to live.

Below is an example of how cooking can save you thousands of dollars every year if you’re still getting takeout all the time.

I’m also telling you exactly how I budget for food every month at the bottom of this post!

Lazy dinner: Trader Joe's salmon burger with sautéed kale and pesto whole wheat pasta. 🍝This meal probably cost around $3 and there's a lot more where that came from. 🤑You know you've developed solid healthy eating habits when you don't buy ANY food out on the weekend and just eat home cooked meals. No weekend eating guilt here! 💪

I chose these months because I know that in April 2015, I was still in my first office job and bought lunch at Cosi, Dig Inn and Le Pain Quotidien every day.

In April 2016, I was definitely cooking and meal prepping regularly.

Here’s a screenshot from Mint of my April 2015 and April 2016 restaurant expenses.

The green bar represents April 2016. I’m very conscious of categorizing my expenses properly in Mint, so this graph is accurate. 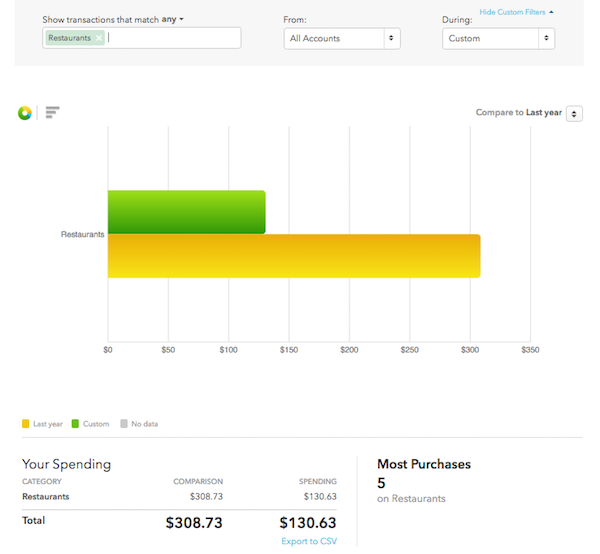 Yet I was blowing money at restaurants all the time and hardly ever cooked. 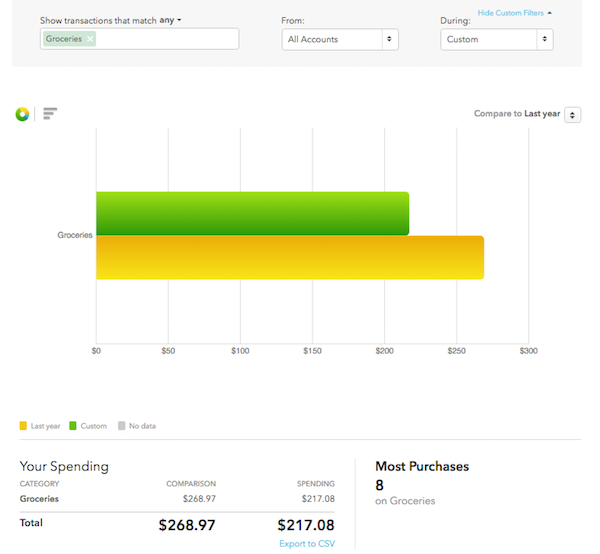 But still, I have no idea why I needed to spend so much on restaurants AND groceries in April 2015. 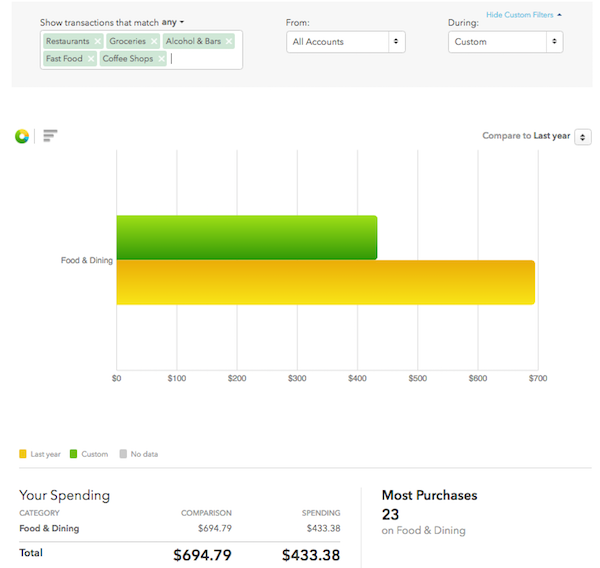 Can you imagine having $260 extra in your budget every month?

That’s a round trip flight to Europe. Or a huge payment on your student loans. Or enough to start investing.

This year, I had a major money mindset shift after educating myself about the basics of personal finance.

Properly putting my income in the right places has become more important than ever.

In 2015 I was breaking even every month.

I spent mindlessly on clothes, taxi rides, alcohol and way too much money on gym memberships.

Now, I’m able to put away 20% of my paycheck because I have a good handle on managing my money.

💰Food for the work week = $51. Mostly produce because I have a well stocked pantry! 🤓 I hit the grocery store after planning out breakfast lunch and dinner from Tuesday – Saturday (my work week). 🌈 Tomorrow I'll be prepping burrito bowls and chicken stir fry 😋

Cooking helps me comfortably put money towards what matters most to me right now: investing, saving, adventuring and education.

You know where that extra cash goes now?

It helps me pay for classes in online marketing, buy more books and save money for legitimate EXPERIENCES outside of enjoying an overpriced meal in New York City.

I would say that cooking has had an equal effect on the health of my body AND my bank account.

Here’s how I budget for food every month:

Keep in mind I’m only responsible for feeding myself.

Sometimes I go over if I have a particularly social month but I have had a pretty easy time sticking to this without sacrificing seeing my friends!

My office has a Keurig. It’s kind of gross, but I can’t complain about free coffee. I also use a french press for coffee at home!

I don’t drink much and when I do, it’s beer which is generally cheaper than cocktails.

Yup. I get Shake Shack once or twice a month, every month.

What do you think? Do you think cooking more would actually make a difference for you when it comes to saving and spending? Let me know in the comments!

Preparation is everything. You can start saving money by prepping meals for the week with my new step-by-step guide to meal prep!

I shared a little bit on stories this weekend, but

Which of these skills do you want to get better at

Pasta used to be a trigger food for me. I avoided

“How can you practice intuitive eating if all yo