This honey lime chicken recipe paired with sweet potatoes and asparagus make a satisfying lunch that you won’t get bored of. I highly recommend adding the honey lime marinade to your bag of quick kitchen tricks. 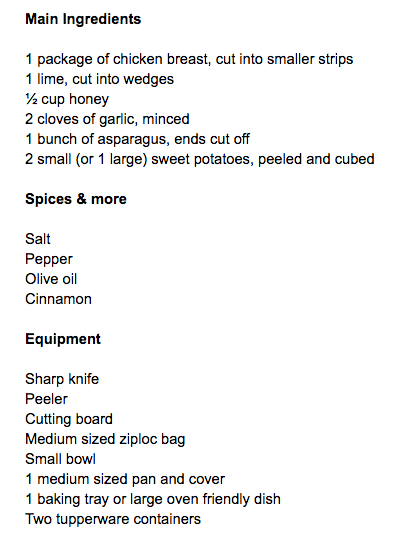 Add half of the minced garlic and the honey to a small bowl. Squeeze the lime wedges over the bowl to collect the juice. Stir well.

Pour the marinade into the bag with the raw chicken. Shake the bag a little for an even cover of marinade. Place in the fridge.

Place peeled and chopped sweet potatoes on a baking sheet or oven friendly pan. Drizzle olive oil and add salt. Sprinkle a thin layer of cinnamon over the sweet potatoes.

Place the sweet potatoes in the oven and set a timer for 15 minutes.

Heat a glug of olive oil in a medium-sized pan on the stove on medium heat. Add the remaining garlic to the pan and let cook until fragrant.

Add the asparagus and toss. Add salt and pepper to taste.Cover the pan and let cook for 4 minutes.

Toss and cook for another few minutes until the asparagus is bright green and not too crunchy.When fully cooked to your liking, transfer the asparagus to two Tupperware containers.

Wipe the pan out to remove any remaining oil or garlic (doesn’t need to be totally clean).

Heat a glug of olive oil on medium heat.After about a minute, add the chicken to the pan. Let cook for 3-4 minutes. Flip the pieces of chicken over to cook on the other side.

To check if the chicken is done, cut one thicker piece in the middle. If you don’t see any pink, you’re good! Transfer the chicken to the two Tupperware containers.

After 15 minutes at 400 F, your sweet potatoes should be just about done. But everyone’s oven is different. Remove the sweet potatoes from the oven and transfer them to the Tupperware containers.

Let the containers cool until they reach room temperature, then cover them and store in the fridge.

This amazing meal makes two lunches that cost $4.50 each.