Whether you’ve heard of jackfruit or not, there’s no denying that it can be intimidating to cook with the first time. But once you give it a try, you’ll quickly realize just how easy to prepare and delicious it is. 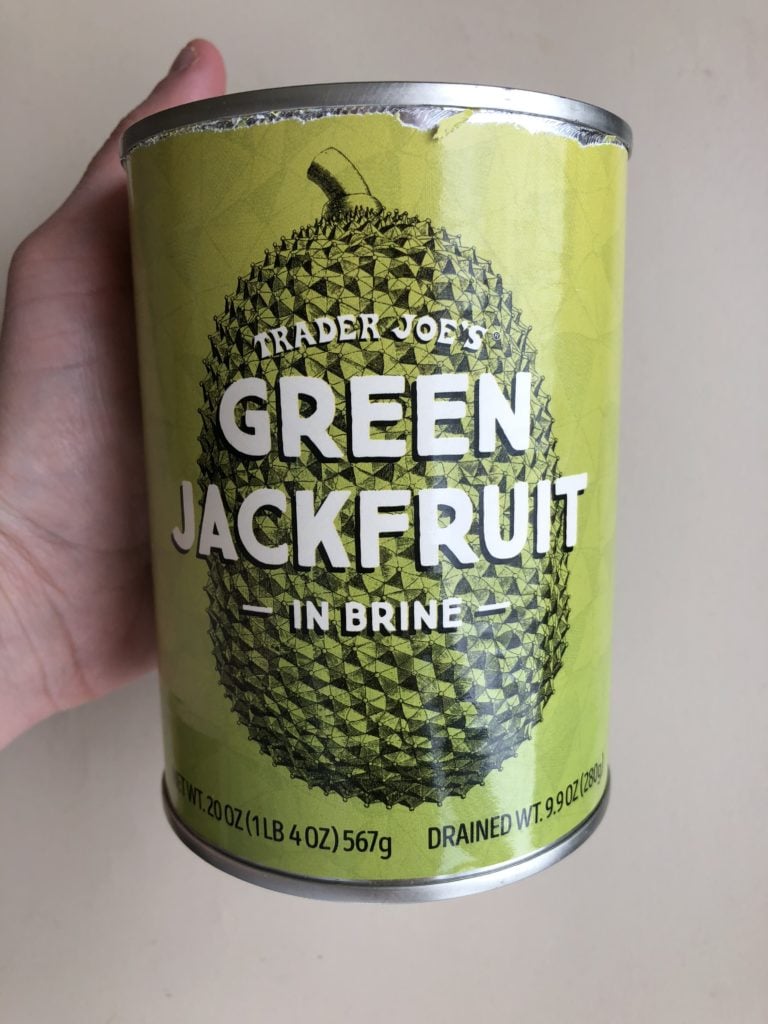 Jackfruit is a fruit native to India and Southeast Asian countries and grows only in tropical climates. There are two types commonly available—green which is unripe or young and better for using in savory dishes, and yellow which is ripe and sweeter and stickier as a result.

It’s still rare to come across fresh jackfruit in the Western world, but you can occasionally spot it in the produce section at Asian food stores or health food stores like Whole Foods. When I’m not able to find it fresh (aka most of the time), I head to Trader Joe’s where it’s sold canned in either a brine or syrup. It’s also available frozen in some supermarkets.

Even though it can taste like meat when prepared correctly, jackfruit, like most fruit, has no protein and is high in fiber. That’s why it’s important to avoid using it as a substitute altogether for protein. Even if you’re going to use it to make vegan pulled pork, try serving it over something like beans or brown rice, or topped with sour cream if you don’t mind dairy, to ensure your dietary needs are sufficiently met.

Young jackfruit, the kind we’re using in this recipe, is mostly bland in taste. It has a very faint sour smell— not in a bad way—that completely disappears after you cook it. (If you’re using canned jackfruit, that’s probably a result of residual brine, which you should take care to rinse off before continuing.) In the end, the way it tastes comes down to how you cook it! Except for yellow or ripe jackfruit, sweet and sticky and better in desserts.

What’s the texture of jackfruit?

Even though it looks kind of like shredded meat, it’s not chewy at all—after you cook it. It’s soft and melts in your mouth, and it’s super easy on the stomach.

I love the texture of jackfruit honestly! If you’d like to try it before cooking it with yourself, order it at a restaurant first. It’s often used in vegetarian Mexican dishes (think, tacos, burritos, quesadillas, enchiladas, tostadas, etc). And it tastes nothing like other vegan meat substitutes, like tofu or tempeh.

Different ways to use jackfruit:

Again, since it’s not a protein source, it should be combined with enough additional protein to create a satisfying meal—otherwise, you might be hungry later!

Here’s a list of dishes that you can easily incorporate jackfruit into:

Don’t be afraid to get creative! In the photo above, I used what was in my containers as a taco filling. In the photo below, I used it as a sandwich filling. Both were awesome.

Where to find jackfruit:

Trader Joe’s, Whole Foods, Amazon and Thrive Market (they have the Upton’s Naturals brand) are where I’d look first. Specialty stores may have it as well (and it’s cheap). 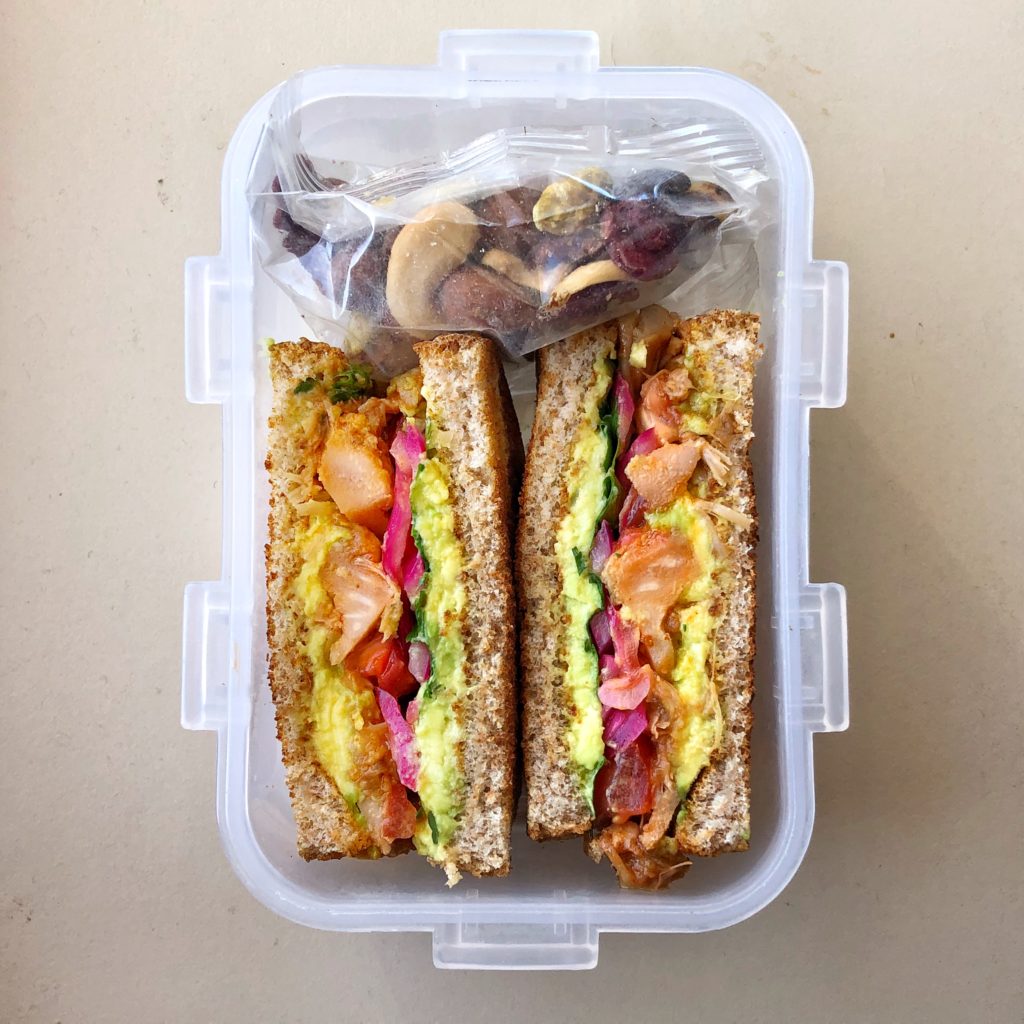 How to prepare jackfruit

Preparing jackfruit, especially if your’s is from a can, is super easy. That’s because what you’ll usually find in the can is already mostly broken down, which is typically the hardest part of getting jackfruit ready to eat. All you’ll have to do to get started is rinse off the fruit (which, as previously noted, is probably covered in brine or syrup). Try to avoid it canned in syrup for more savory recipes, as the fruit just soaks up the added sugar. Remove the hard core at the center of each piece and any seeds that may be hiding within. Then, break up the pieces that remain into small bits that resemble pulled pork, and start cooking. If you’re still not totally clear on what to do, check out the video below.

How to cook with jackfruit

Jackfruit is extremely versatile and can be cooked in numerous different ways. I’ve found recipes for jackfruit fried “chicken” that’s made in an airfryer, Instant Pot jackfruit curry that takes mere minutes to make, and so much more. Know that you can do just about anything with this unique fruit, so don’t be afraid to get experimental with it!

BBQ jackfruit will last in your fridge for up to four days. You can eat it cold or reheat it on the microwave or on the stove.

Feel free to play with different sauces – it doesn’t have to be BBQ sauce! An Asian stir fry sauce would go well with it too.

One can gave me four servings of shredded jackfruit. Though the can said two servings, I found that it was a lot!

If you have leftovers, pop them in an airtight container and freeze them for later. Though I’ve never frozen cooked jackfruit, I don’t see why it wouldn’t work!

If you end up making this recipe, please share it with me on Instagram @workweeklunch or use the hashtag #workweeklunch!

Are you looking for more vegan meal ideas? Check out these no-cook vegan recipes!

Want to crush meal prep next week? Sign up below and immediately get my free meal prep guide for busy people!