If you’re already feeling under the weather, it’s hard to come up with soid recipes for when you’re sick.

We have reached what I prefer to refer to as “soup season”: the 3-5 months (depending on where you live) during which the days are short, the air is cold, and the sidewalks are icy, and during which I eat enormous quantities of soup. Unfortunately, it’s also cold and flu season: the 3-5 months (regardless of where you live) during which you are likelier than usual to get sick with a cold or the flu or strep throat or bronchitis or, or, or…

Cold weather is not your immune system’s friend. But winter often exacerbates another problem, according to New York-based dietician nutritionist Laura Iu: “So many people are deficient in vitamin D,” she says, “but even more so during the winter months, because of the lack of sun exposure.” That deficiency can not only affect bone health and calcium absorption; it’s also important for the immune system.

Iu recommends, in general, foods like fish, milk, eggs, fortified cereals, and soy milk. It’s also essential to get your vitamin C in, of course. “It won’t necessarily prevent the cold or flu,” says Iu, “but can shorten the length of time it lasts.” She recommends citrus fruits, bell peppers, and leafy greens like spinach.

One of the most popular recipes for when you’re sick, of course, is chicken noodle soup (and we have a great easy recipe for that, as well as a veggie version, in the WWL Program!). So soothing and delicious. But what if, like me, you don’t eat meat? Or you’re looking for something that will actively make you feel your best during the cold winter months, even if you’re not sick? Or maybe you want something that’s easy to make and you don’t have any cans of chicken noodle around and you don’t feel like trekking all the way to a grocery store?

I’ve got 14 recipes to help you out, whatever the situation. And yes, many of them are soup. Happy soup season!

While eating a variety of foods can help us feel well, no food can be solely responsible for helping you avoid illness or cure an illness. These are just the foods that are easy to prepare and will warm you up if you’re feeling under the weather.

Recipes for when you’re sick 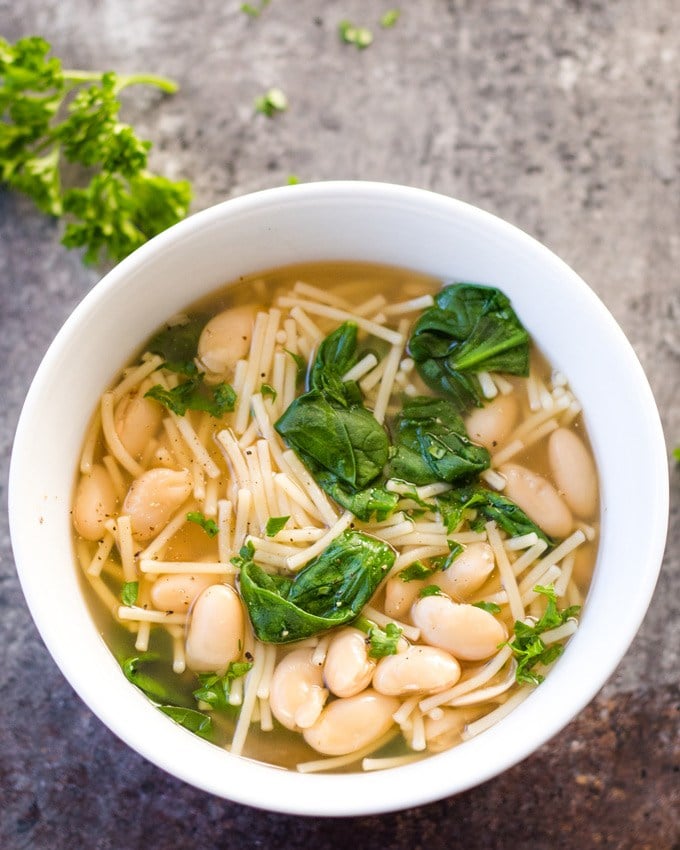 All you need is seven minutes and a few pantry-friendly ingredients to throw together this warming vegan soup. This is probably one of the easiest recipes for when you’re sick on this list! 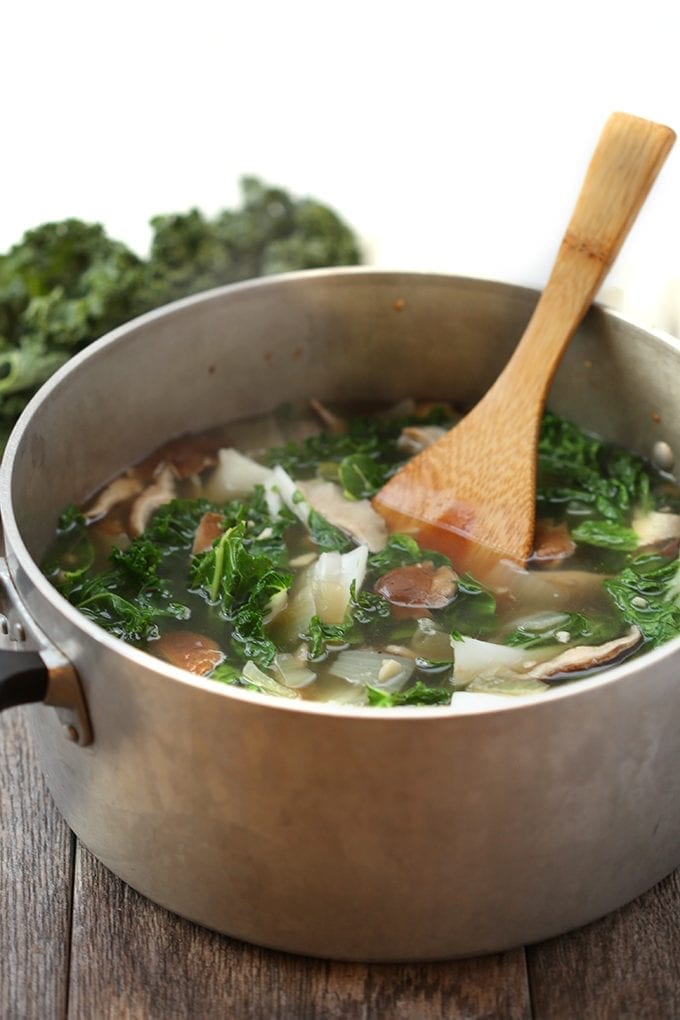 I mentioned it’s soup season, right? I’ve spent many a long workday craving nothing more than a warm bowl of soup to warm me up and soothe me when I get home, only to spend upwards of half an hour prepping and making it. This soup is a great one to meal prep with over the weekend so that after an icy commute, you can come home, heat it up, and feel that cozy, soupy comfort in the space of about ten minutes, putting this at the top of the list of recipes for when you’re sick. 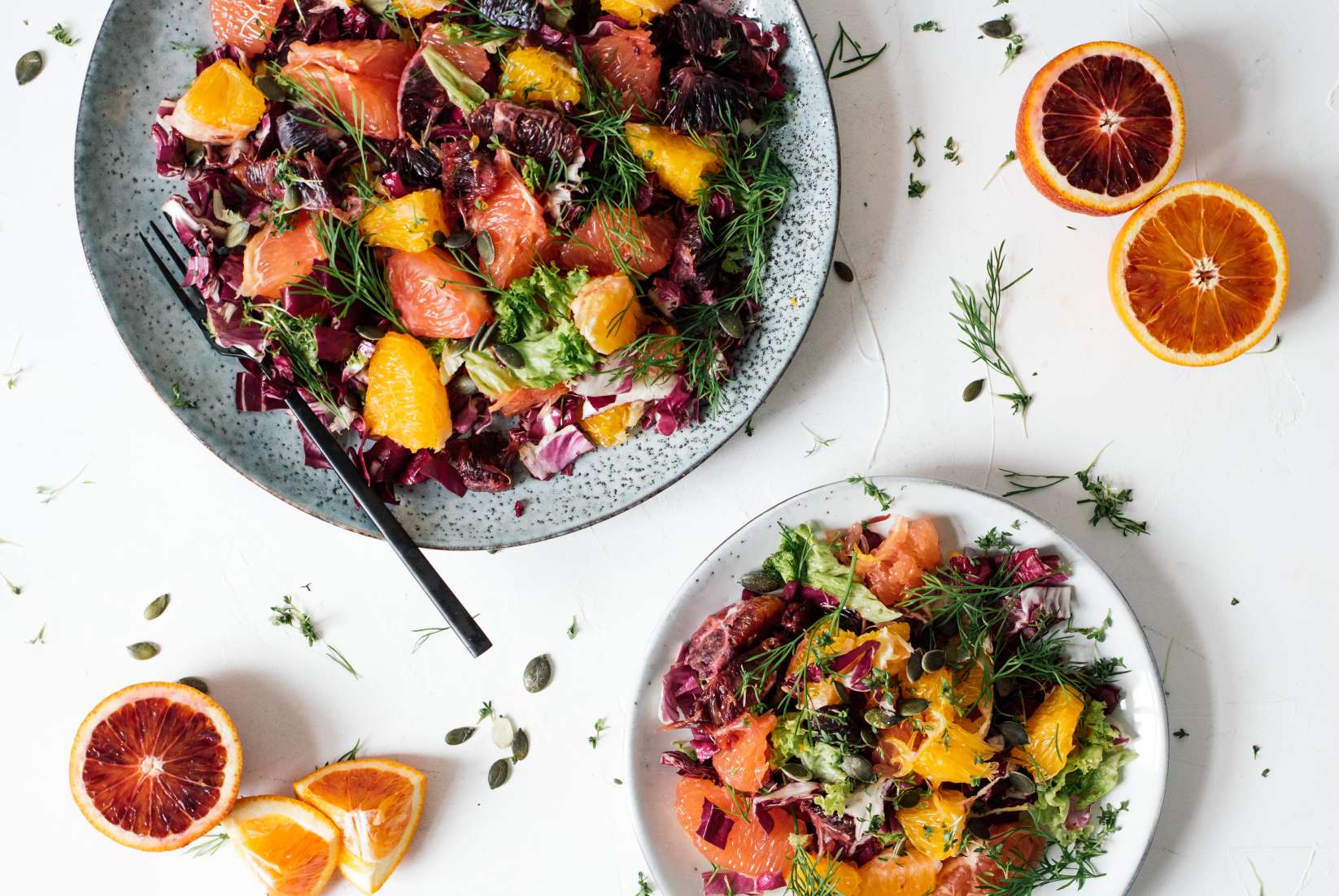 If you need vitamin C, I feel like eating this salad is almost as effective as injecting it directly into your veins (is that a thing?). But it’s also super tasty and refreshing, especially when you’ve spent weeks eating holiday food. Not that it’s bad! I treasure the opportunity to eat enormous amounts of lasagna. But I do find that after eating lots of potatoes for a few days straight, my body starts begging me for some fresh fruits and veggies, and this salad is the perfect answer to that craving. 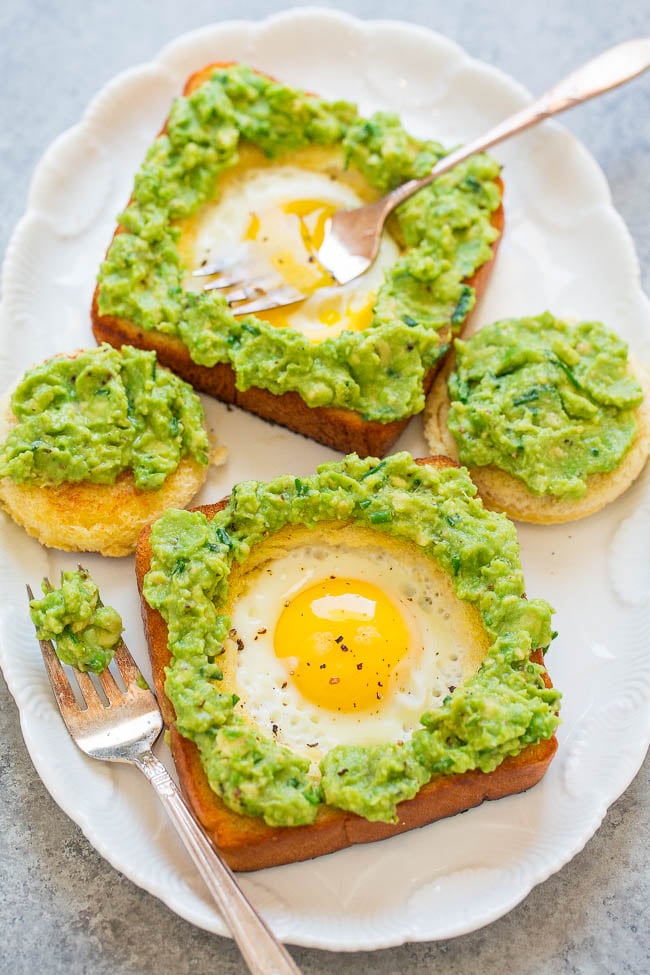 If you’re all about eggs and toast when you’re feeling sick, this is a great upgrade to that classic sick day meal! 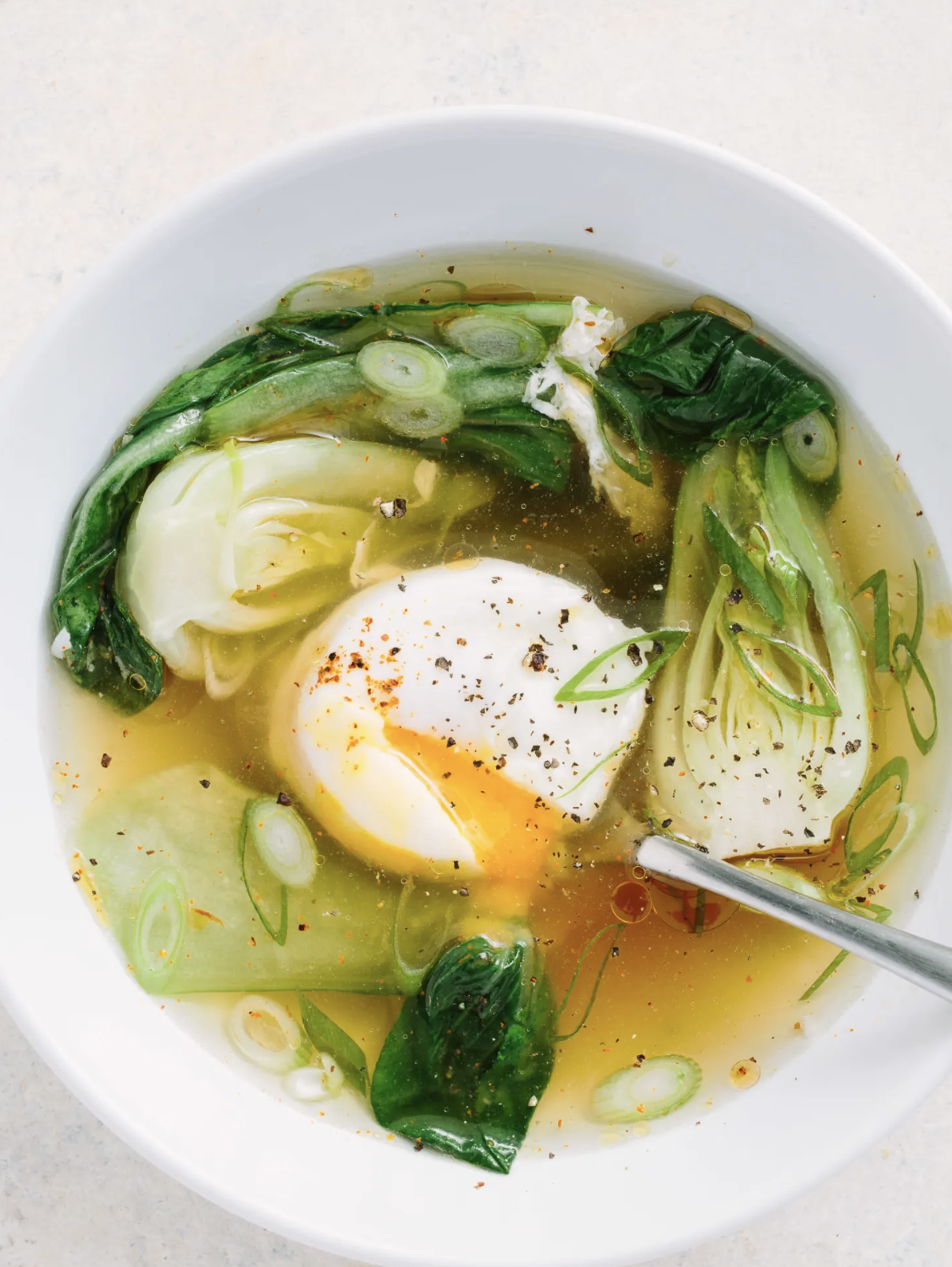 Remember that long-day-at-work, desperately-craving-soup scenario we talked about? Well, this recipe is perfect for if you don’t have a pre-prepped soup stored away in the fridge or freezer, and also if you’re trying to fight off a cold. It’s got ginger, which Iu says is great for preventing colds because of its anti-inflammatory properties, along with leafy greens and even an egg. Yum.

Popsicles are a well-known childhood sore throat soother, but they’re not just for kids! The honey and chamomile have soothing properties of their own that, in popsicle form, will truly work wonders. Also, it’s just a fact of life that popsicles are fun to eat. 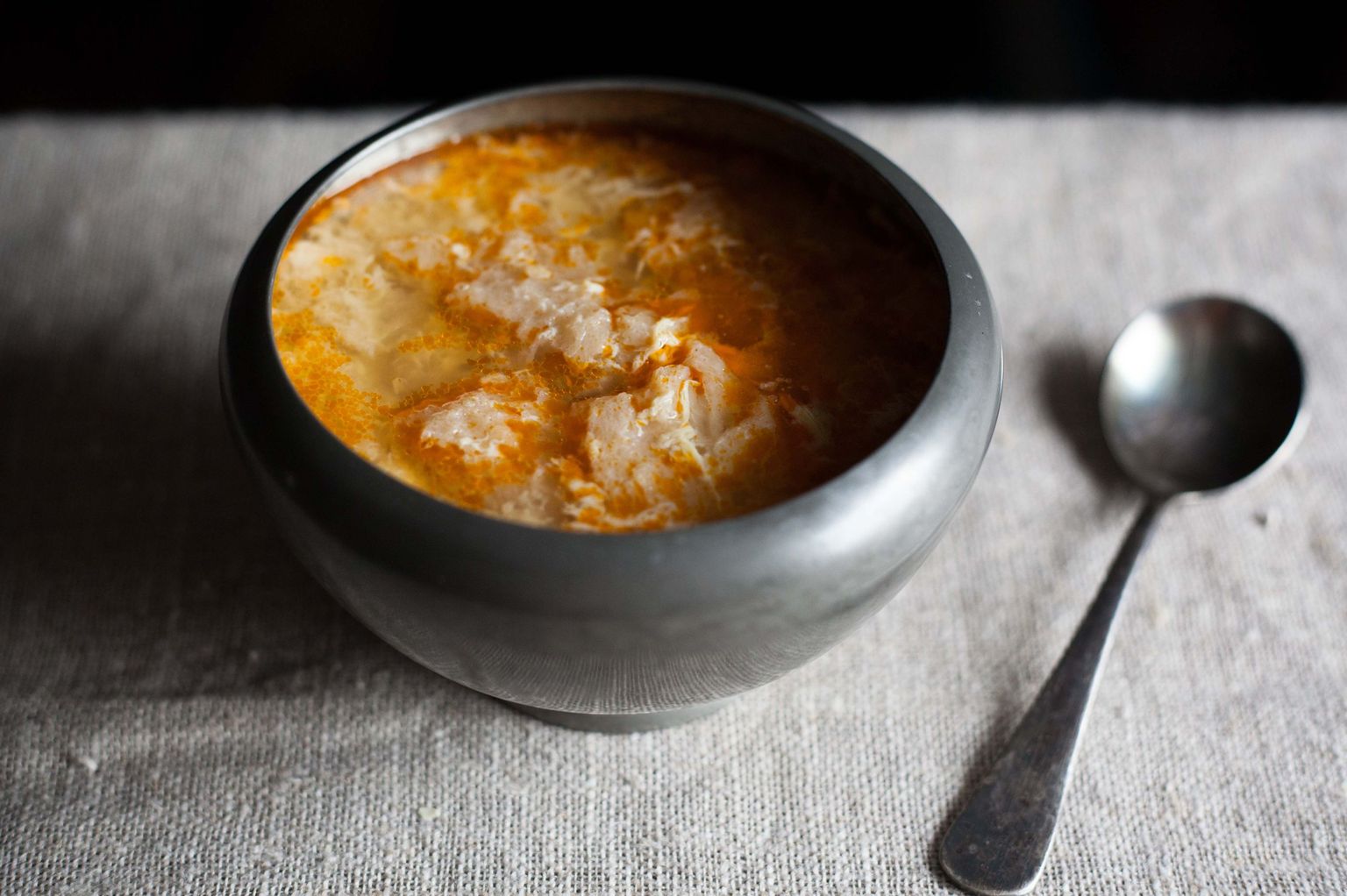 Yes, more soup. I did warn you! Garlic is, in my opinion, a miraculous ingredient. My personal go-to cold remedy, in fact, is tea made with raw garlic and ginger. But I digress! The point is, garlic is good. And this soup contains a lot of it, along with bread, which is both delicious and helpful against nausea, and eggs, which are delicious and also provide that protein. Egg drop soup is a go-to favorite for me, so the egg drop element is what really sold me on this recipe. 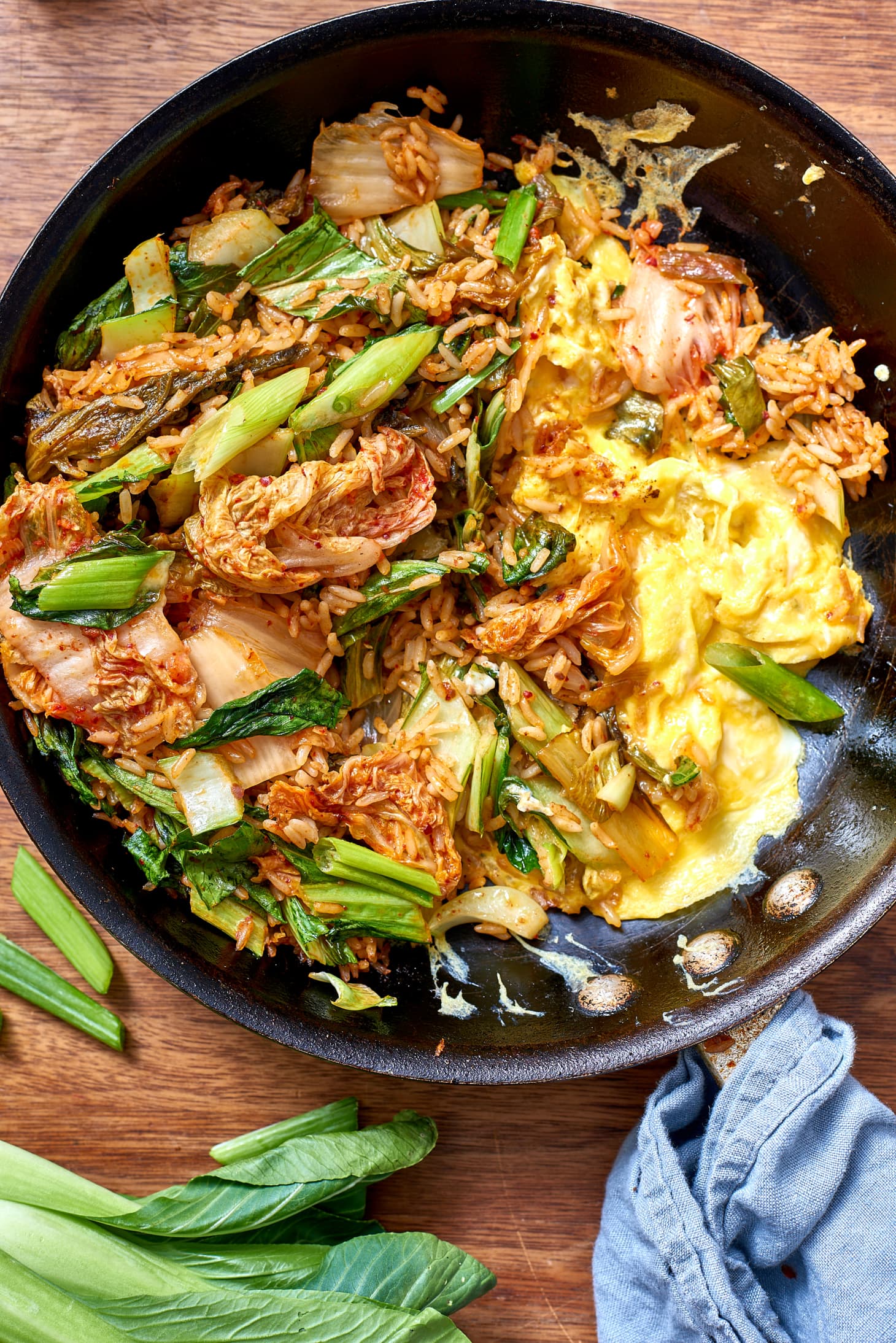 This has all the comforting goodness of fried rice, which I’ve always found to be a great stomach neutralizer, with the addition of nutritious greens and probiotic kimchi, both solid immune system pals and also delicious in general. Plus, since this is a one-pot recipe, it’ll be pretty easy to whip up (and clean up) when you’re feeling under the weather. 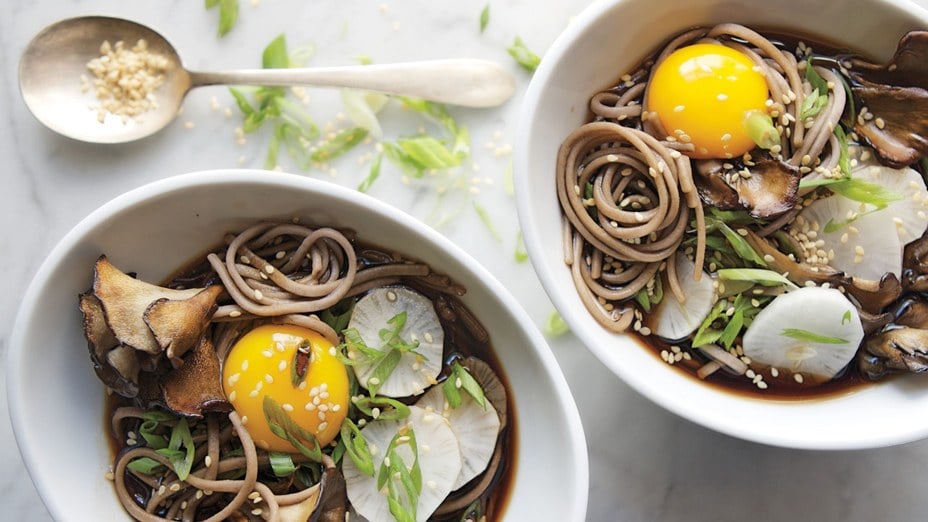 You are probably tired of me talking about the endless benefits of soup, but this Alison Roman recipe simply had to be included — it’s full of nourishing ingredients that will help you avoid or get over that cough. Also, soba noodles. That is all. 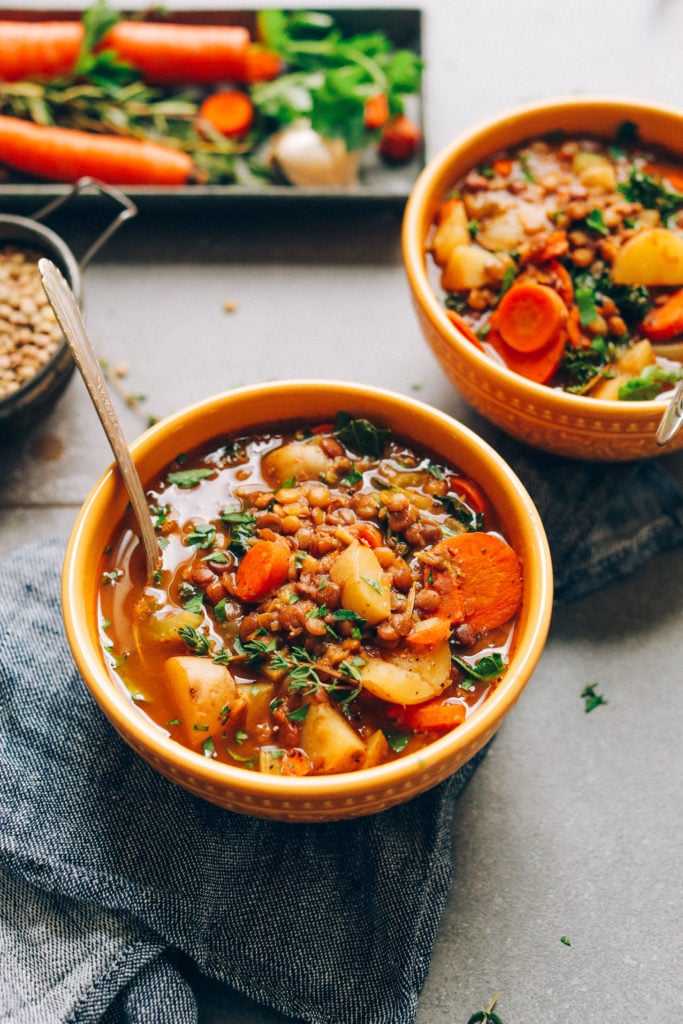 This soup recipe is perfect when you’re having a sick day. It’s mild in flavor, lentils will fuel you up and of course, it’s cozy. You only need one pot to make it too! 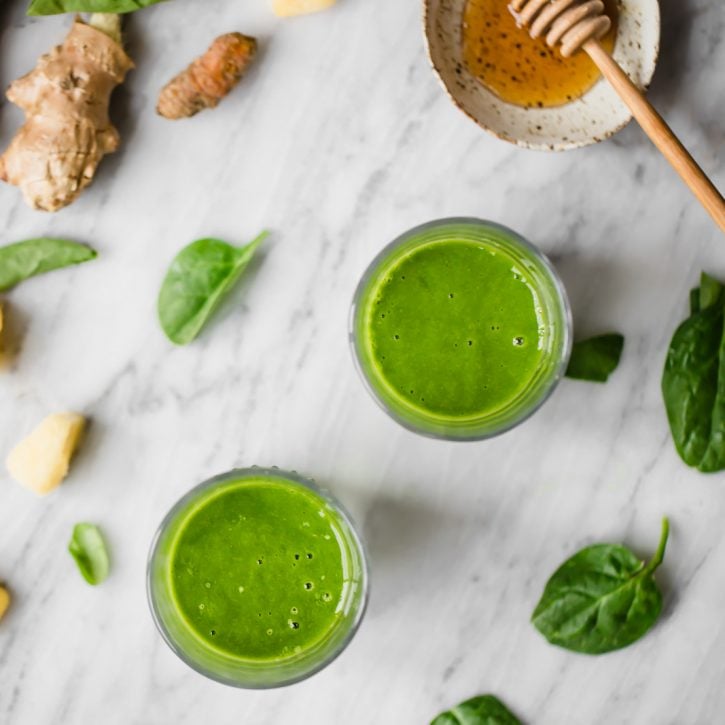 I had to include a smoothie in this roundup of recipes for when you’re sick! I love them and they’re a great way to get all your nutrients in a form that is easy to make, tastes really good, and is soothing to a sore throat. No slicing or dicing necessary. This recipe lets pineapple shine through, propped up by immune boosters like spinach, ginger, and turmeric. 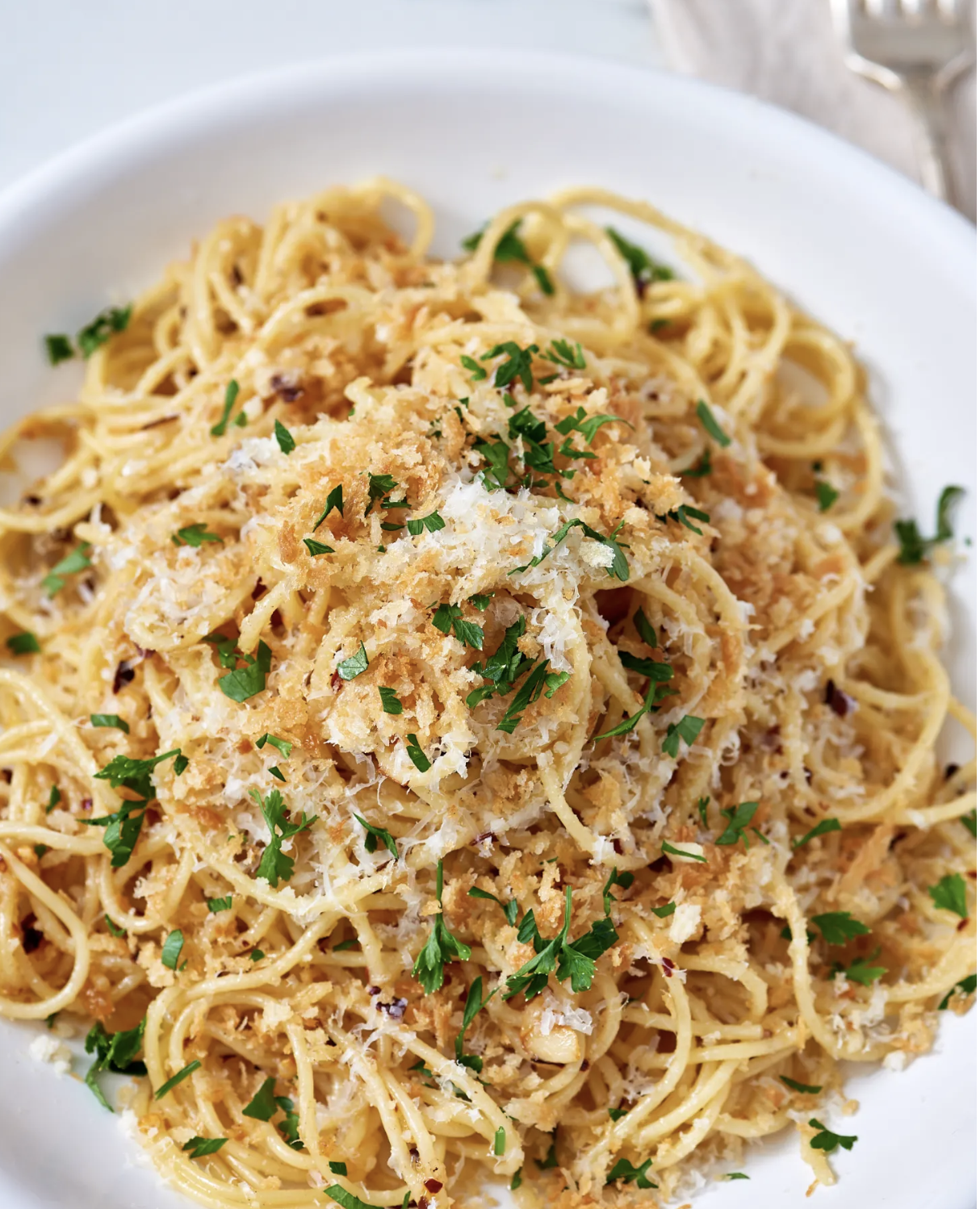 For when you’re nauseous and can’t keep down anything but the plainest of flavors, this is a slightly more dressed up version of the most basic pasta and butter combo. Of course, it’s still pretty easy and quick to make. 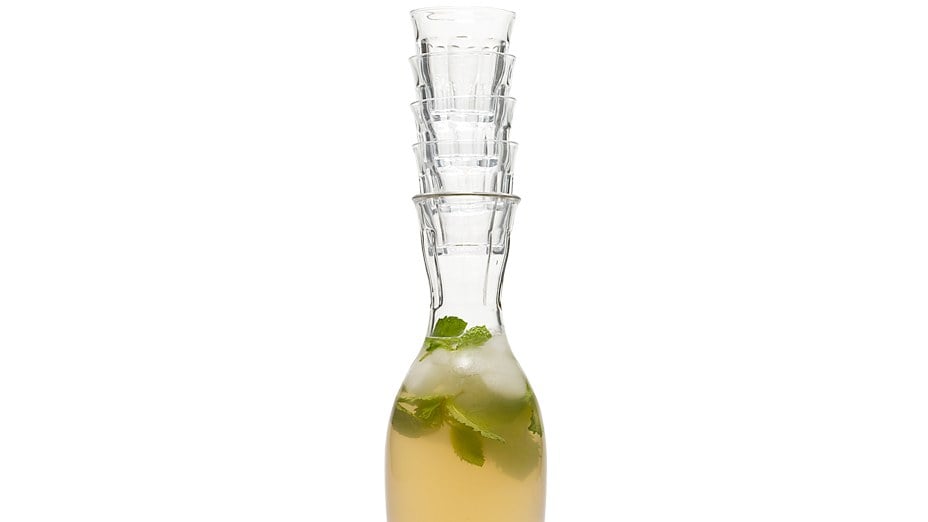 Ginger ale is generally always drunk by those who are sick and nauseous, but it’s unclear how much the extremely diluted version sold in a can will actually help. I kind of love the idea of home-made ginger ale, and it’s actually really easy to make! Just honey, ginger, and club soda. Sickness is often accompanied by boredom, so this gives you something to do for fifteen minutes with a result that will genuinely help you feel better. 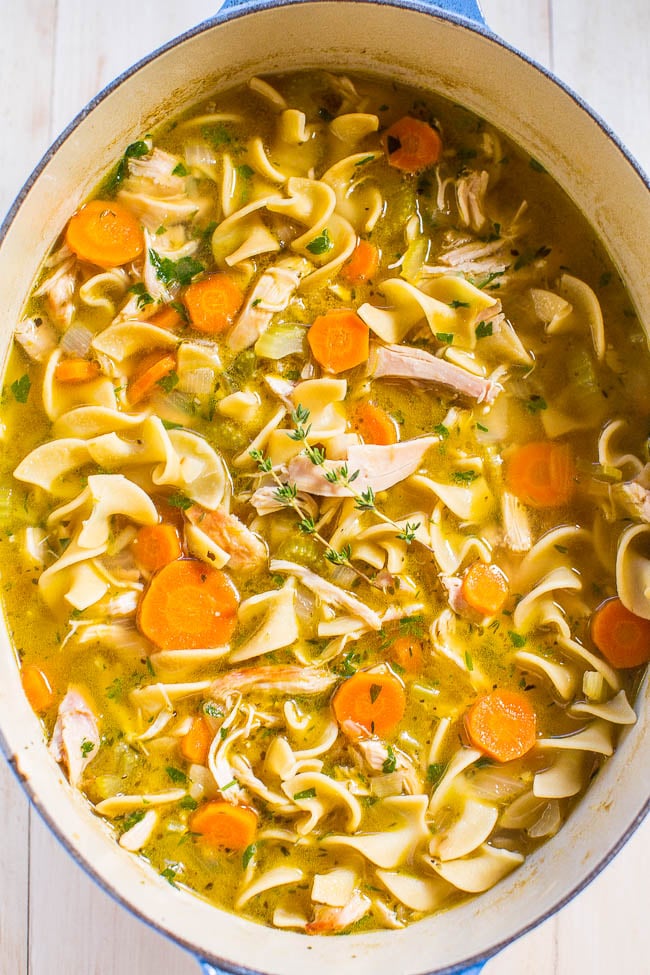 Finally, I had to include the classic. Everyone has their own chicken noodle soup preferences, but I think this recipe is a nice compromise. It’s not just straight-up canned soup, but it’s also not asking you to make broth from scratch. It takes shortcuts where it makes sense to, but still includes the fresh herbs and veggies.

Helpful Tools For Cooking Recipes For When You’re Sick

We hope you found this list of recipes for when you’re sick helpful!

I’ll leave you with an intense drink recipe recommended by Iu: Combine orange juice, lemon juice, cayenne pepper. She says it contains capsaicin, which can clear the nasal passages, and oregano oil, which has antimicrobial properties and is an anti-inflammatory. And remember, listen to your body. We hope you stay healthy and warm during this season!